Often you can find weeds growing in gardens and people don’t know that they are there. Even if they are large specimens. Mainly because they don’t know they are weeds. They are let go and often then become the neighbours problem. let’s look at some of the more common ones.

It is amazing to note how often pepper trees are found growing in local gardens. Some people don’t even know they are weeds

and let them take over the garden as they will, producing seed for other gardens. The birds like eating the seed and pass them on to other gardens. The also can reproduce from roots the send near the soil surface and then send up shoots which become a new tree.This is the most common weed on the coast 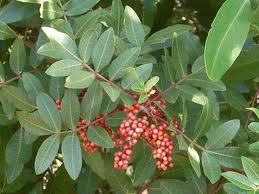 Asparagus ferns, is a knee height size shrub that is often found in gardens and sand dune areas. Some gardeners think they are nice because of their red berries, but people who are wise to their

trick of having shiny red berries, know they have many ways to reproduce and are extremely hard to get rid of. The main method they find their way into your garden is by birs who love the seeds. Once they have taken hold in your garden they send out fleshy roots which have bulbs on them. These bulbs can produce new plants. Often when we have pulled out the invader from the garden the bulbs reproduce. So you have to take action to keep an eye on the area, where you cleaned, and pull out any fresh plants. 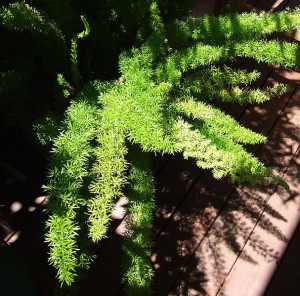 Sword fern, Boston fern. Like the asparagus fern, this has many tricks. Formerly a popular garden plant, most smart people won’t plant them unless they take precautions that they don’t spread. These reproduce by runner, which can strike new plants anywhere on the underground stem or bulbs they grow. When you pull them out be sure to scour the area for bulbs and runners, and afterwards keep an eye of them for new plantlets. 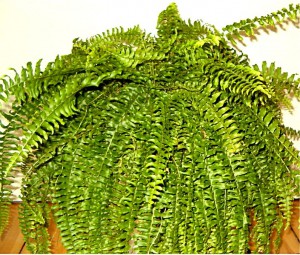 Ochna multiflora is a small shrub often found and spread by birds.

Tall lantana– Lantana camara is a climber usually in forests which can reach 30m, formerly a popular garden specimen but now a noxious weed

Cocos palm– Syagrus romanzoffiana, formerly the most popular palm now a noxious weed. It often seeds in large numbers near to the parent plant

PS A noxious weed is a plant deemed by local government to be a threat to local animals or bushland. If a plant is a noxious weed in your area by law you are not permitted to propagate or grow it.