In Australia we have many plants from the pea family. Acacia’s or wattles for example are the second most common plants found in Australia after Eucalypts. They are short lived plants that are prone to tree borer disease. 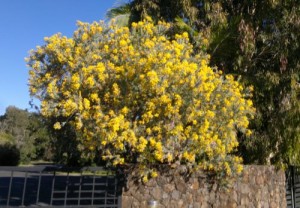 What exactly is a tree borer? Well in the case of Acacia’s it is most typically beetle larvae chewing there way through a tree. They leave a trail of sawdust behind as a tell tale sign of their presence.

You might have seen various types of beetle larvae around, white juicy squishy type things, the biggest known species of which is the wichety grub, which is large enough to feed a human, but most of them are smaller and wouldn’t be worth the effort extracting. 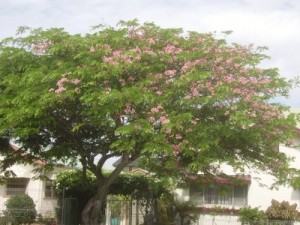 Cassia grandis, a pink flowering exotic species, is a delicacy for tree borers

which often attack natives species have also developed a liking to other pea family tree sized plants. It seems they like their wood. Trees like Poinciana, Caesalpinia, Cassia, Albizia which have both native and exotic species are equally attacked.

These larvae create paths in trees that can weaken them, allowing stems in brittle and thinner stems which snap in windy weather. In thicker sections of

Given that many of these trees have limited shelf life means, that sometimes the damage

has already been done. In one occassion, we tried to save a poinciana, but really didn’t do the work necessary to ensure it’s survival.

What can be done? Cut off the affected limbs. Any dead wood left over try to treat it, so it doesn’t spread. Check if there is anything in the soil you can do for it. Usually it is to big to cultivate the soil, so just fertlise it and keep the water up to it in dry times, and hope that it doesn’t get to wet in rainy periods. 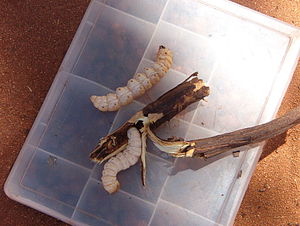 The witchetty grub, in the Australian outback (Photo credit: Wikipedia)

But the important thing to remember is that tree borers are endemic to Australia, when they are hunger they are not fussy as to their type of food. Also many of these plants are short lived, and they are just helping nature along.