It’s one of the biggest weed pests in our garden. And we find it hard to get rid of. You spray herbicide on it, it seems to die, but another shoot soon pops up out of the ground.

Despite all our efforts we still haven’t been able to get rid of it. 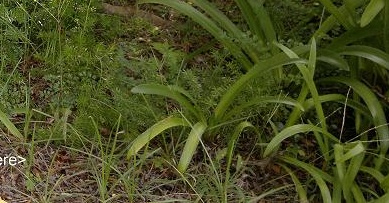 It first appeared in our garden after we bought in new garden soil. Sometimes we can’t even trace when it arrived in our garden, or any signs of how it got into our garden. But knowing some of these things is helpful in the process of solving the problem. You have to keep looking for signs on how it keeps entering your garden even though you know you have got it under control. But in the meantime you just keep chipping away at the problem and getting it manageable.

Let’s look a little at the issue.

The nut grass is a grass that has an underground storage bulb. When a plant has a bulb, most herbicides will often kill the green parts, but the bulb is usually very resilient, and after a while send up new green shoots. Also nut grass can root very deep, and they have a system of running underground stem, with bulbs at certain intervals. The bulbs are what send up the leaf growth.

1. First of all make sure any of the known nut grass areas never go into seed. This will reduce you problem significantly.

2. Herbicides like Glyphosate only kill the green parts, but the theory is if you are consistent enough, i.e. every time is starts to show the next sign of green growth poison it again, you should be able to exhaust the food source for it’s leaf growth

3. Many situations you can’t use sprays because they are situated within the foliage of plants you want to keep. Start weeding. Dig your garden fork into the soil, until the bottom of it’s head. Dig deep. Then lift the soil. Pull on some leaves until it feels like it’s about to break the runner. At this stage don’t break the runner. Dig the fork in deep again, close to where it won’t lift anymore. Then start to pull more of the runner until it all comes loose. You won’t get it all in one go, but keep at it until you can’t see any more. In gardens where I have been giving enough time to achieve this I rarely see any of them afterwards

4. They appear in lawns you can spray them with a chemical called Halsulfuron-methyl, and this gets rid of them for good without harming the lawn. It can be used in other areas to get rid of them, but just consult the label instructions to be sure of it’s uses. This can also target it’s little brother Mullumbimby couch.

5 If you live on a sloped block, the seed could be getting washed in

from another source, maybe even from your neighbour.

If you know your source was from soil that you bought, most landscapes yards who make the soils up will usually deny that they are the source. Maybe they are right that it didn’t have any in it, but if you checked out the farm the did the mixing on there are probably plants scattered around the place blowing in seed.

But once you have gotten rid of the bulbs from your property and identified the source and got that under the control, you should be certifiably nut grass free. 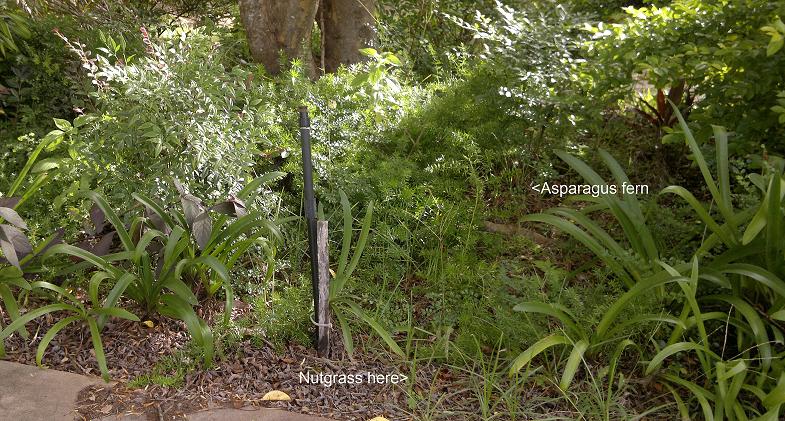 this garden has a few weed problems

One thought on “Getting Rid of Nutgrass”